But despite what the gurus have told me, I’ve still struggled to make it work for my business.

And by make it work, I mean make ANY money out of it.

I know all about how influencers make it work (I’ve just watched the Dubai TV series), but I’m struggling to link scantily clad females to employment law nuggets!

But last Friday, I saw how it can work in a commercial way for business owners who choose to wear more clothes.

I was due to do some disciplinary training for a client, and after talking it over with Nadia, she suggested we get our “video guy” to film it, so we could use some snippets in our marketing.

I thought it was a great idea, but then I completely forgot about it.

Later that night, I was mindlessly scrolling through Instagram when I saw a post from Mick at Boxset Media (he’s the “video guy”).

This jogged my memory, I ‘DMed’ him, and in 10 minutes it was all sorted – location, video and price.

By bedtime on Friday, he’d secured £2,000 of work he’d probably never have got – I may have remembered by Monday, but by then it would have been too late.

Marketing doesn’t always have to be complicated, or highly orchestrated – sometimes it’s just being in the right place at the right time.

Even on social media. 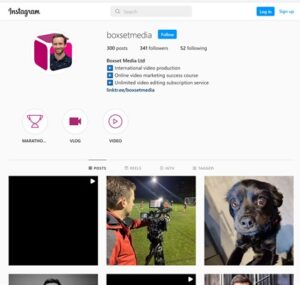